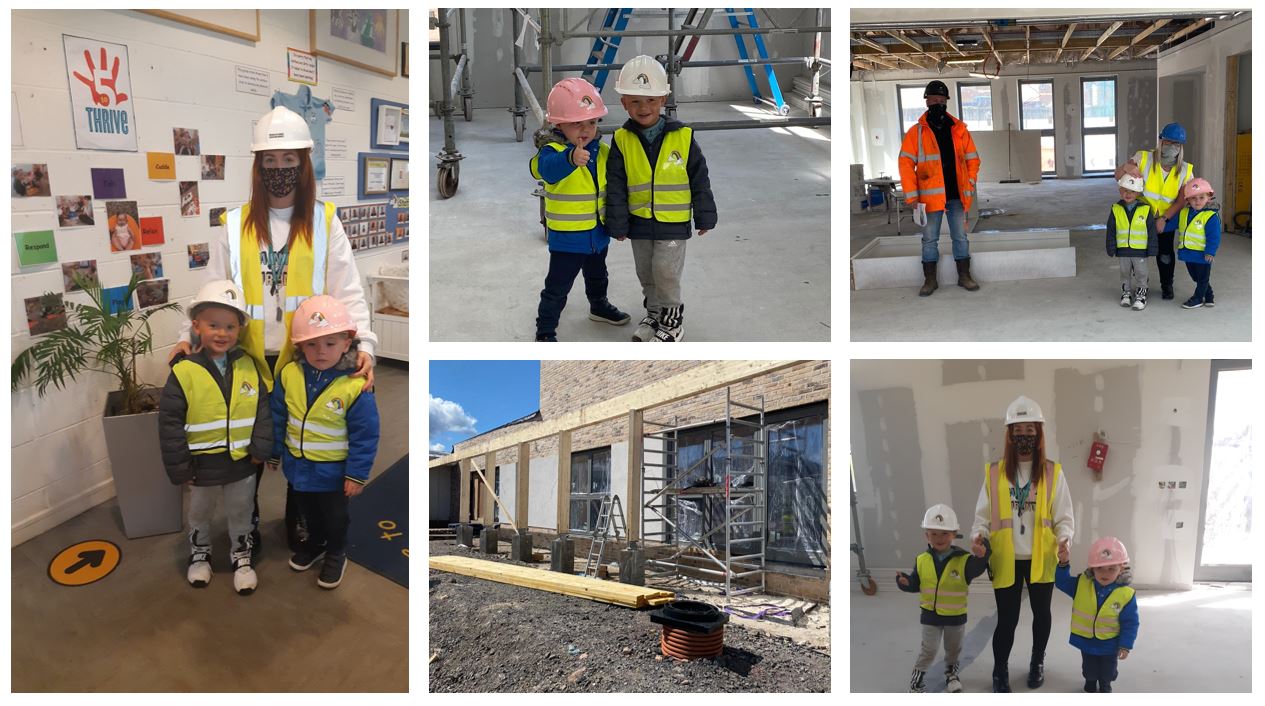 Children in Port Glasgow have given the thumbs-up to an extension to their nursery as work continues on the £2.4 million project.

Youngsters from Rainbow Family Centre made the short trip next door to see how construction on a new wing for their pre-school is progressing.

The extension will increase capacity at Rainbow Family Centre by 64.

It is being built by contractors CCG Scotland and the council’s development partners, hub West Scotland in tandem with a £2.9m new-build for Larkfield Children’s Centre in Greenock.

Both projects, designed by architects Holmes Miller, are expected to be completed this summer.

Councillor Jim Clocherty, depute leader of Inverclyde Council and convener of education and communities, said: “You can see from the faces of the young people that they are really excited about the expansion to their nursery and us adults can’t wait to see the end product too.

“The expanded Rainbow Family Centre and new Larkfield Early Learning Centre will be welcome additions to our already enviable school and nursery estate here in Inverclyde.

“These developments will increase capacity for the number of young people we can accommodate in each location to support the efforts to give all our children and young people the best possible start to their lives and their education.”

The expanded Rainbow Family Centre and new Larkfield Early Learning Centre will be welcome additions are being created to support Inverclyde Council’s doubling of early years provision to 1,140 hours per eligible child annually.

The local authority managed to implement the policy in August 2020 as originally planned despite the expansion being delayed by 12 months to August 2021 because of the impact of the coronavirus pandemic.

Among the Rainbow children and staff surveying the new wing of their nursery were acting head of centre, Sonia McKay, staff member Jessie Friel and children Kieran Simpson and Jaxx Gillespie, who were shown around by site manager Andrew Wilson, from CCG.

Ms McKay said: “The visit went extremely well and everyone is very excited about seeing the finished product.

“The extension itself is coming along fantastically and is blending in beautifully with the existing building.

“The children just wanted to know where the toys where, and Jaxx actually counted the pipes in the toilets and said there would be six toilets in the new nursery.

“Andrew and his team have been a pleasure to be working alongside.

“The parents and local residents have all been very patient and tolerant and have also been asking about the progress and when will it be ready.

“Once completed it will enable us to continue providing the highest quality of flexible early learning and childcare within upper Port Glasgow in line with the already successful 1,140 hours expansion.

“This extension will be an invaluable and integral part of the local community.”

The new wing is being built in the nursery’s car park which will then be connected to the existing building.

The car park has been relocated to the neighbouring former Park Farm Community Hall site, which was demolished.

The extension will feature a new main entrance, staff and meeting area, playroom and an outdoor learning space.

We use cookies to ensure that we give you the best experience on our website. If you continue to use this site we will assume that you are happy with it.AgreePrivacy policy